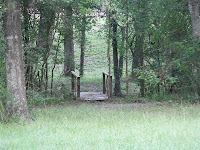 We were neighbors making no attempt to be friends. Our mutual lack of concern for the other and a small patch of woods separated us. Plus, there is a branch and an old fence in those woods which delineated our property line. Often, I heard him working on his place. He surely heard me on mine. We waved if we passed each other on the road, but we didn't even know each other's name.

One day we both happened to be close to our property line and we carried on a short conversation through the woods, each other barely visible to the other. On another occasion, it was easier to talk to him after I trimmed away a few bushes. As the "neighborship" grew, more and more bushes came down and the view of my neighbor became clearer. Finally, I pushed down the old fence and cleared a path. Now, all we had to do was jump the branch to come talk to one another. Then, one day, my neighbor built a bridge over the branch. Now, there is a trail worn smooth by our friendship.
It happened a little at a time: clearing the brush, pushing down the fence, building the bridge. A line from a song written by Gloria Gaither says, "Fear builds walls instead of bridges." Life, it seems, is a lot about cutting away the underbrush of our fears, pushing down the fences of prior notions and visionless expectations, and building a bridge to a better life; a better me.
Christmas, "Joy to the World--," a Son is sent- a bridge is built between God and man. May this year the path between us be worn smooth by the tracks of our relationship.
Merry Christmas and God bless you. !
Posted by Miles of the Journey at 10:40 AM 3 comments: Links to this post 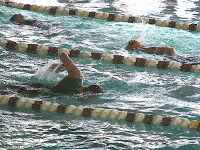 It all started with rotator cuff surgery and the doctor telling me that I had let it go so long, the tear so complete, that surgery might not take, or it might not hold. I prayed about it, began to walk briskly for up to an hour and half on a regular basis, and rode my indoor bike trainer regularly. I just felt like God wasn't through with me doing this stuff- no, not just yet. I healed really well and my range of motion came back quickly. My doctor was very happy with my progress, but not as happy and thankful as I was. He released me forty days from surgery. Two weeks later I did the Athens triathlon in Athens, Texas, a short triathlon of 300 yard pool swim, 15 mile bike and 5K run. I surprised myself at the ease at which I could do it and was even more surprised when I was 1st in my age group--the first time ever. God is good. 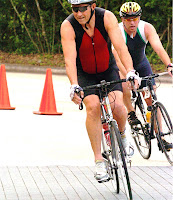 Just short of two months later, I did the CB & I Triathlon in the Woodlands, Texas (500 yard swim-15 mile bike-5K run). My time was about the same as previous years, which was pretty encouraging. But, more encouraging was that, in addition to my wife, my daughter, my son and his wife and my two grandchildren were there. That was absolutely great. No, award this time but the family being there was award enough- God is good.

A couple weeks later I did the Kona East Side Triathlon in Baytown, Texas. It was hot and muggy and I was the oldest finisher there. No one besides me were in my age group, so they aged me down to the age group below where I got 2ND place. The shoulder was holding up really well with all the swimming-God is good. 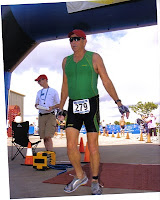 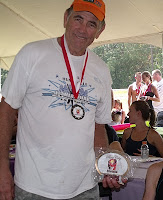 I trained through the summer and in September went to the Rose City Triathlon, in Tyler, Texas. This was the best and most participant-minded, event I have been to this year. Competition was tough at this event, even in the geriatric age groups, as I barely managed a 3rd place. We had a great time at this one-God is good.

A week later I did a 62 mile bike event (The Raven Ride) out of Huntsville, Texas. This turned out really well and I was feeling like I was about to be in shape for the half ironman distance event November 7th. In October I did a half marathon (The Huntsville Half) out of Huntsville, Texas. I used this event as sort of a trial for the half marathon run on the half ironman. Everything seemed to be working out just fine.
And, the best part, my son, a friend, my wife and grandchildren were there to cheer me. - God is good.

Finally, that day arrived when I began and finished a half ironman distance event-Ironstar, Montgomery, Texas. For a while I had to remind myself that I had actually done the half ironman distance. It is, and was, a dream come true, especially when I think that I started the year with my arm in a sling, a pain pump strapped to my waist, and sleeping in a recliner. During that time, I would sometimes rub my hands over my bike's handlebars or the tubing, and dream of that great feeling of having a good year. My prayers were answered. I had my good year; I have that great feeling and - God is good. 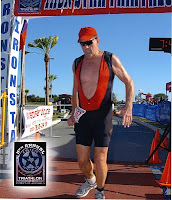 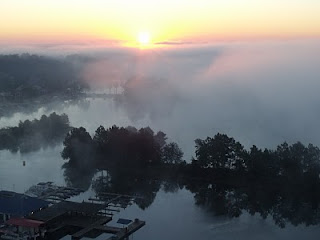 That morning it was all about that first step. The half ironman distance was waiting for me, and I am not ashamed to admit, I was a little scared when I looked out at that cold sunrise on the lake, on the swim course. We were staying on the seventeenth floor of the hotel on the lakeside and I could see all I wanted to be afraid of from my balcony.

Of all the race photos for this entire year of events, this photo is my favorite (and I am not even in it). The dawn was absolutely beautiful but I knew that water was cold, the course was the longest I had ever attempted, and in moments I would be down there in it. To me, the picture says "I faced my fears and began."

So, in these days of lesser training, no event scheduled, and no training plan, I have this picture on my desktop. It serves as photo inspiration that on that morning I overcame and the "overcomer" still lives inside waiting, for me to go down the elevator, get in the cold water and let the Miles of the Journey begin again.
Posted by Miles of the Journey at 10:12 PM 1 comment: Links to this post

Today was special. After lead-legged, sporadic training, I broke into the clear, like a half back getting through the line into the open field. Riding my old bike with its new frame felt natural and easy. I seemed to be rolling rather than pushing. The legs didn't falter and the cadence remained steady-in my zone again and it felt like coming home. Yeah, there are the holidays to come, but I know that today, I have begun to begin again. The beginning is a small light in the distance right now, but I just know God will grow the glow...Thank God for all He has brought me through and brought me to: more miles of journey. There is a special feeling in my heart of one who truly feels blessed.
Posted by Miles of the Journey at 7:16 PM No comments: Links to this post

"----Still Behind Him Pushing As Hard as I Can"

My brother-in-law was appreciative of my running the half ironman distance event for him. In fact, he seemed to be inspired by it at the time. But cancer can wear one down, and I could only hope that some part of that inspiration would remain in him to help carry him through this ordeal.

Now, he is deep into his race, the battle is raging as he endures chemo and radiation regularly. His weight is falling off terribly. His voice is weak and he can't talk long or often on the phone.

I would suppose the completion of such events makes a statement, serves as a witness for persistence, endurance, willingness to tolerate pain for a finish, and an indomitable will. And, a deeper appreciation and realization of that witness, will get me out of the house to try to deserve to have someone still behind me, pushing as hard as they can.

Wherefore seeing we are compassed about with so great a cloud of witnesses, let us lay aside every weight, and the sin which doth so easily beset us, and let us run with patience the race that is set before us.
Heb 12:1
Posted by Miles of the Journey at 9:46 PM No comments: Links to this post

Revisited the movie "Shawshank Redemption" last night. I like the line, "either get busy living or get busy dying." At my age and as much time as I have to spend visiting the nursing home, I can see this thought played out. Daily, I think, we make that choice to fear to hope, or to embrace hope in the face of all that might oppress us, and get busy living.

Sun is out...warming some...a run-yes, then about a 3 hour bike ride. Just writing it down makes me grin: Today, I chose hope.

The bravest thing you can do in this life is to have hope
Posted by Miles of the Journey at 8:30 AM No comments: Links to this post

Miles of the Journey

Miles of the Journey
Christian, 76 year old endurance athlete eating plant based - father, husband, and grandfather. 32 marathons, 53 marathons. Have attempted Ironman Texas 6 x with only limited success...still living- still trying. And, writing a small book about my exploits in failure at this. The title is A Day Unlike Any Other Day. Will in a few months as soon as my present Ironman Texas attempt is done one way or the other.